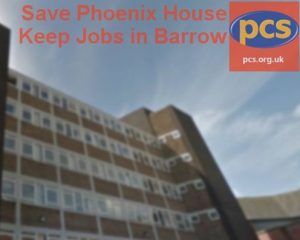 In 2016, the government announced its decision that a key Department for Work and Pensions (DWP) office, Phoenix House, would be closed in March 2018.

Following a campaign led by the PCS trade union, and supported by the Forum, the decision was reversed. Phoenix House will remain open until at least 2023.

Phoenix House, in Barrow-in-Furness in Cumbria, is a specialist benefits office that deals with claims for industrial injuries benefits. Many of the people who claim these benefits have an asbestos disease.

Industrial injuries benefits are a niche area of the benefits system, involving complex rules, and a vulnerable client group, many of whom are elderly and have been newly diagnosed with a terminal illness.

The 70 or so DWP staff at Phoenix House have, for many years, processed claims for these benefits sensitively and efficiently.

Had the closure gone head, the specialist expertise of the DWP staff at Phoenix House would have been lost. The likely result would have been a deterioration in service and longer delays in processing benefit claims.