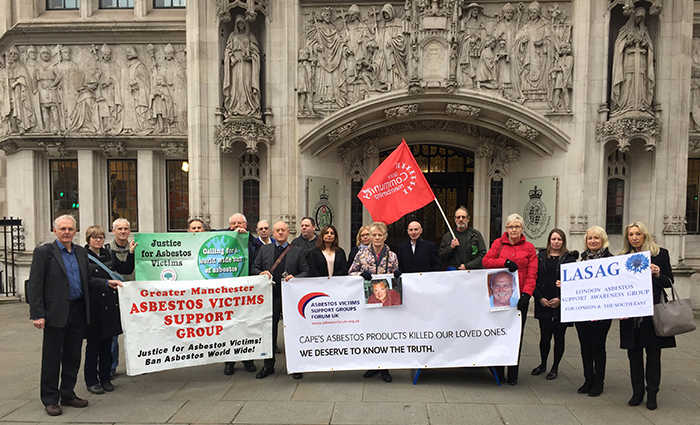 Cape Intermediate Holdings (formerly Cape PLC) was one of the largest asbestos companies in the world, with mining interests in South Africa as well as factories in the UK. Their asbestos products were widely used in construction in this country, especially Asbestolux and Marinite insulation boards. These products are at the heart of the mesothelioma epidemic in the UK, as well as being responsible for other asbestos diseases such as lung cancer, asbestosis and pleural thickening.

The UK has the highest rates of mesothelioma in the world, with around 2,500 people dying of this disease each year. A similar number die of asbestos-related lung cancer, asbestosis and pleural thickening according to the Health and Safety Executive (HSE). More people die of mesothelioma than in road traffic accidents..

Most victims developed mesothelioma just through going to work, to put food on their family’s plates and a roof over their heads. They were not protected or warned of the real dangers of working with asbestos.

In 2017 the Asbestos Victims Support Groups Forum UK (the Forum) started a legal fight to obtain documents that Cape had been forced to disclose in an earlier court case. The Supreme Court granted us access to many of these documents which we have now made publicly available. These documents show that Cape:

Cape did all this despite knowing of the link between asbestos and mesothelioma. They put their profits before the lives of their own workers and those of transport workers moving their products, joiners and other construction workers using their products and the women who developed mesothelioma through washing their husbands’ overalls. The actions they took then are the reason people are dying of mesothelioma today and why thousands more will die in the future.

Despite their central role in the mesothelioma epidemic in the UK, Cape has made no contribution to mesothelioma research that we are aware of. Money is desperately needed for better treatment and a cure for this dreadful disease. Cape is a wealthy company with £165.5 millions in reserves from profits accumulated on the backs of those they exposed to asbestos.

We demand that Cape now donate £10 million to fund medical research to find a cure for mesothelioma.  It is the least asbestos victims and their families deserve.

Please sign our petition here to support our campaign

Plus tweet about the campaign using the hashtag #CapeMust Pay