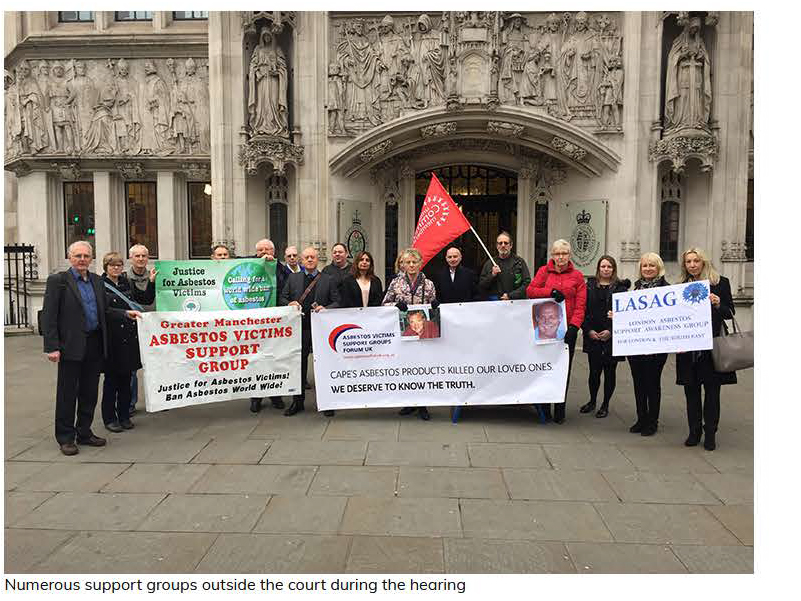 Documents saved from destruction thanks to a court battle waged by the Asbestos Victims Support Groups Forum UK (the Forum) will be vital to future asbestos compensation cases.

The documents were obtained, after the Forum commenced court proceedings against Cape following the 2017 case of Concept 70 Limited v Cape Intermediate Holdings Limited (Cape). They would have been destroyed but for the timely intervention of the Forum. The documents provide extraordinary evidence that Cape knew the high risk of fatal cancer caused by the use and handling of Asbestos Insulation Board (AIB), trade name Asbestolux and show the extent of its interference with the Government’s regulation of asbestos in the 1960s and 70s.

The documents state that “a caution label on our products and none on [our competitors’] would make our selling efforts most difficult”. This demonstrates that Cape, an asbestos products manufacturer, dismissed the idea of a warning label due to concerns about profitability.

The documents were part of written material placed before the court in the legal action by Concept 70 and others who were trying to recoup compensation payments they had made to employees in asbestos compensation claims. Before judgment was given the parties agreed in a confidential agreement to destroy the significant documents, so they would never come into the public domain thus continuing to conceal the dangers.

Graham Dring the then chair of the Forum, instructed Harminder Bains partner at Leigh Day to issue an urgent application to preserve the documents. His case then proceeded to the Supreme Court and set a legal precedent allowing written material placed before a court to be seen by a non-party.

Having now studied the contents of the documents the key documents reveal the following:
• Cape encouraged its American partner Johns-Manville to suppress information on the health risks of asbestos and in the late 1950s the idea of a warning label on Marinite sheets was dismissed because of concerns that it would affect profitability.
• Cape’s in-house sampling data show significantly higher dust counts than Technical Data Note 13 (TDN13) levels, even when just handling Asbestos Insulation Board (AIB) trade name Asbestolux.
• Cape compromised the Government’s regulatory response to asbestos by lobbying the British Occupational Hygiene Society (BOHS) and succeeding in downgrading the regulation from a ‘no dust policy’ to a ‘maximum allowable concentration approach’. It then successfully lobbied to increase the proposed limits.
• All the while, Cape adopted a policy of selectively sharing its sampling data with the BOHS, providing evidence of low dust counts and withholding the more damning surveys.
• Cape lobbied the Government to water down the suggested approach to warning labels on AIB. Internal correspondence shows it campaigned to prevent other manufacturers from introducing warning labels on its own AIB/Asbestolux.
• Cape provided misleading reassurance about the dangers of asbestos in its communications with the Government and the public, contrary to its own data as to dust counts and health risks of asbestos.
• Despite the process by which the BOHS limits had been set, and the fact that they related to asbestosis, Cape engaged a public relations firm to publicly use the limits as a rebuttal against the risk of cancer/mesothelioma.
• Cape publicly stated that there was no risk from handling AIB/Asbestolux, despite knowing the high dust counts in its own sampling data.
• Cape continued to manufacture AIB/Asbestolux in 1980 contrary to defending court cases on the basis it had ceased manufacture in 1978.

Martin Stear, liability expert on behalf of Concept 70 Limited conceded that TDN13 limits only related to asbestosis and not to mesothelioma. Also that work with Asbestolux and Marinite, including simply handling these boards, carried the potential for very high exposure and that only cutting for 10 minutes probably had a higher exposure than the TDN42/EH35 figures.

Dr Smither (Cape’s Group Medical Adviser) accepted that mesothelioma could be caused by “short and possibly small” exposure and that “no type of asbestos proved innocent”.

Joanne Gordon Chair of the Forum said:
“The Forum is now demanding Cape make a donation of £10 million towards Mesothelioma Research. We believe victims and their families deserve this by way of an apology from Cape for their deliberate deception and shamelessly causing deaths, adding insult by vehemently defending cases.”

The Forum has now launched the Cape Must Pay campaign – details of how you can support this campaign can be found here.

Harminder Bains, Partner at law firm Leigh Day added:
“Having fought on the Forum’s behalf for several years to secure access to these hugely important documents I felt revulsion and anger when I finally read through the documents to provide the summary of the key points. They clearly show that Cape knew of the high risk of fatal disease, yet deliberately withheld information and lobbied the Government to protect their profits. As a result of their greed many men and women including my father have lost their lives.
“In addition, Cape and Concept 70 sought to prevent these documents from coming into the public domain by agreeing to their imminent destruction. This cover up would not have come to the light had it not been for the Forum’s persistence.
“Access to Justice would have continued to be denied if it were not for the fact that Counsel namely Robert Weir QC and Jonathan Butters and I were prepared to deal with the case pro-bono. There must be numerous other similar instances, where potential claimants are unable to obtain pro-bono legal representation hence corporations such as Cape escape justice”.

See link to summary and documents by clicking here.

We demand that Cape now donate £10 million to fund medical research to find a cure for mesothelioma.  It is the least asbestos victims and their families deserve.

Please sign our petition here to support our campaign

Plus tweet about the campaign using the hashtag #CapeMustPay